Home » The power of Tetris to enhance human performance

This is a new twist on human-computer interaction. Today’s teenagers have evolved, or at least developed new behaviors, in order to excel at Tetris.

Playing computer games is a recognized form of personal development. You can increase your reaction times, improve your hand/eye coordination and develop your short-term memory while having fun hunched over your smartphone or sitting in front of a screen.

Tetris players, however, have taken behavioral evolution to a new level.

The falling block game Tetris was created in 1984 by Alexey Pajitnov and once installed on the Nintendo Entertainment System console it became an instant hit – these days we’d say it went viral, but that term had not gained popularity at the time.

The first Classic Tetris World Championship was held in 2010 for the filming of a documentary, Ecstay of Order: The Tetris Masters – see our report which includes the film’s trailer and a link to its website. Although the competition was created to make a movie, it took on a life of its own and from 2012 was part of the Portland Retro Gaming Expo, except for 2020 and 2021 when it was held online . The

While there were many variations of Tetris in 2010, contestants played the 1989 Nintendo version of Tetris on Nintendo Entertainment System consoles and CRT televisions. The inaugural tournament was won by Jonas Neubauer, who also reached the final in the first nine iterations of the tournament and won the world championship title seven times.

If you want to know how he did that, here’s an introduction to Jonas Neubauer’s Testris competition from 2017, the last year he received the 1st Place Trophy.

Much to the shock and sadness of the community, Neubauer passed away suddenly in January 2021. The Classic Tetris World Championship Trophy has been renamed the Jonas Neubauer Memorial Trophy and redesigned as a golden J-tetromino for the 2021 online event .

When Neubauer was defeated in 2018, his opponent Joseph Saelee, then 16 and new to the game, used the “hypertapping” technique that was beginning to dominate competitive play. Rather than maneuvering pieces into place by holding down the left or right of the retro D-pad, this method of play, pioneered by Koji “Koryan” Nishio, requires players to quickly press the D-pad at the correct intervals to move the Tetris pieces in different directions without losing speed. As it requires more than 10 button presses per second to be effective, it is a riskier and more demanding style of play and it is also difficult to learn and punish the body.

Hypertapping had already seen the records set by Neubauer swept convincingly, but the adoption of rolling brought more breakthroughs. For example, in the 2021 CTWC Semi-Final between Saelee and Jacob Huff, Saelee averaged scores over a million, but it wasn’t enough. According to Chris Karnadi writing on Polygon:

Huff was able to play well past the kill screen, once at level 36 and once at level 40, and catch him no matter how high Saelee had scored.

However, although Huff used the roll in the 2021 final, he was beaten there by 2020 world champion Michael “Dog” Artiga, 14, who beat older brother Andy “Pixel” Artiga the year before. previous, when playing online in adjacent games. bedrooms.

Since then, Andy Artiga has adopted rolling. According to the report on Polygon in a monthly competition in May 2022, he won a match that broke the world record for highest combined score in a single match, highest losing score (1.5 million) and the highest winning score (2.1 million). Artiaga reached level 58, 29 full levels after the game’s kill screen.

It is not the record, however, that was reached in April when a young player reached level 95 with a score of 3.7 million, beating the previous world record of 1.4 million points. :

As Chris Karnadi comments, today’s teenagers are scoring more than three times what Neubauer and other older players even imagined possible just a few years ago. And for that feat to happen, it took a sea change in mental and physical agility. 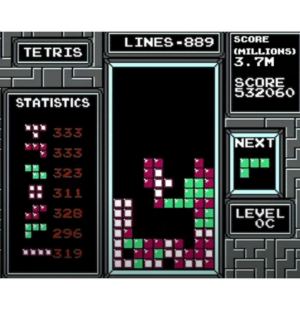 Teens rewrite what’s possible in the world of competitive Tetris

Ecstasy of Order – a Tetris documentary

We use cookies on our website to give you the most relevant experience by remembering your preferences and repeat visits. By clicking “Accept All”, you consent to the use of ALL the cookies. However, you may visit "Cookie Settings" to provide a controlled consent.
Cookie SettingsAccept All
Manage consent

This website uses cookies to improve your experience while you navigate through the website. Out of these, the cookies that are categorized as necessary are stored on your browser as they are essential for the working of basic functionalities of the website. We also use third-party cookies that help us analyze and understand how you use this website. These cookies will be stored in your browser only with your consent. You also have the option to opt-out of these cookies. But opting out of some of these cookies may affect your browsing experience.
Necessary Always Enabled
Necessary cookies are absolutely essential for the website to function properly. These cookies ensure basic functionalities and security features of the website, anonymously.
Functional
Functional cookies help to perform certain functionalities like sharing the content of the website on social media platforms, collect feedbacks, and other third-party features.
Performance
Performance cookies are used to understand and analyze the key performance indexes of the website which helps in delivering a better user experience for the visitors.
Analytics
Analytical cookies are used to understand how visitors interact with the website. These cookies help provide information on metrics the number of visitors, bounce rate, traffic source, etc.
Advertisement
Advertisement cookies are used to provide visitors with relevant ads and marketing campaigns. These cookies track visitors across websites and collect information to provide customized ads.
Others
Other uncategorized cookies are those that are being analyzed and have not been classified into a category as yet.
SAVE & ACCEPT